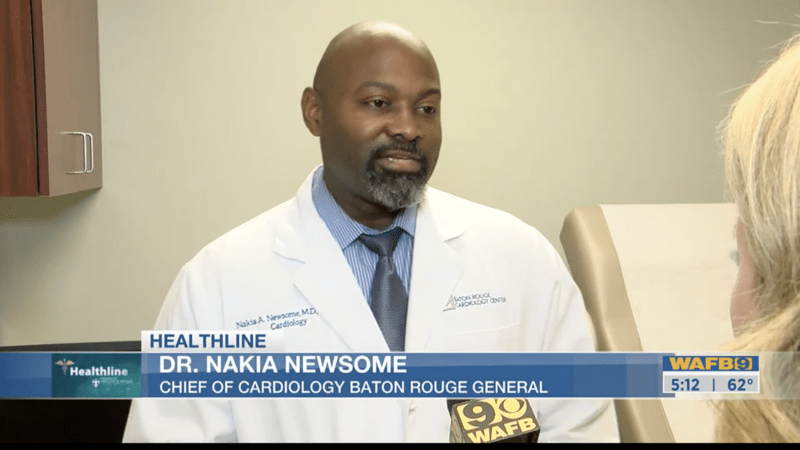 To watch the story, click here.
By Cali Hubbard

The young man was in good health before the hit and has made great progress so far.

“Very rare situation, especially a young athlete like himself,” said Dr. Nakia Newsome, chief of cardiology at Baton Rouge General. He has been following Hamlin’s case from the start.

The 24-year-old has made continued progress in recovery. The latest update from physicians said his neurologic function remains intact. He has been able to talk to his family and care team. As doctors continue to monitor Hamlin, Newsome is trying to educate people on heart health.

“A heart attack is when there’s a blockage in the arteries to the heart,” said Newsome. “Cardiac arrest is this one. He had sudden cardiac death, which is an irregular heart rhythm that is not sustaining for life.”

Newsome said AEDs, or automated external defibrillators, like the one used in Hamlin’s case, are important. They shock the heart and make it go back to a normal rhythm.

What makes you more at risk of cardiac arrest?

“There are some things that make people more prone to this,” said Newsome. “There’s a rare thing called a qt prolongation, and this is when your heart cells don’t repolarize correctly.”

Congestive heart failure also puts you at more risk of sudden cardiac death. Newsome added that now is a good time to take this opportunity to get your heart checked out.

“The biggest takeaway is immediate initiation of CPR,” said Newsome. “This is what can save people’s lives. With the awareness of heart health, we always advise people to be conscious of their diet and exercise.”

According to the American Heart Association, about 90% of people who suffer out-of-hospital cardiac arrests end up passing away. CPR can double or triple a cardiac arrest victim’s chance of survival.

You can learn more about hands-only CPR through the Baton Rouge Cardiology Center by clicking here.

Contact sports and your heart health
Scroll to top